Comments Off on Early-American Furniture

From 1680-1840 the popular styles of Great Britain influenced Early-American furniture. Waves of migrants crossed the Atlantic in search of a new life on American soil. As a result, craftsmen relied on the styles and construction methods of their native land. 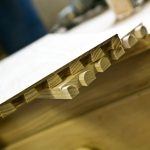 Similarly, the “William and Mary” period of Great Britain found its way to the new frontier. Thus being known as the “Early Colonial” period. This period of furniture featured bun feet and turned legs.