Comments Off on Amish Furniture – A Brief History

The roots of Amish furniture in America reach way back to 17th Century Switzerland. In 1693, a schism developed between the Anabaptists and a group within the church led by Jacob Ammann. The Anabaptists are the forerunners of the Mennonite Church. Ammann’s followers became known as Amish. Amish Furniture – A Brief History fills in the blanks between the Amish European roots and their furniture-building expertise in America. 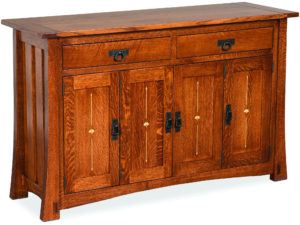 Many of the Anabaptists largely adapted to the norms of society around them. But the Amish retained a separate identity. They embodied the principles of simple living and plain dress. Also, they resisted many conveniences of modern technology.

The Anabaptist groups were severely persecuted in Europe. So many fled to the mountains of Switzerland and southern Germany. And the early Amish started the traditions of farming and holding worship services in homes rather than churches.

Later, many of the Amish and Mennonites accepted William Penn’s offer of religious freedom. So they settled in present-day Pennsylvania in the early 18th Century. Other Amish families settled in the Midwest.

The Amish ethic of integrity, self-sufficiency and hard work guided their daily work. And this gave rise to the crafting of furniture. Then, “folk art” became popularized during the early 20th Century. And Amish-crafted furniture become highly prized by folks from all over the United States.

Brandenberry: Amish Furniture At Its Best

Amish men teach their sons a number of practical crafts, including cabinetmaking. And numerous Amish cabinetmaking shops produce superior-quality, solid hardwood furniture. In fact, you’ll find most of these shops in Northeastern Indiana and Ohio. Brandenberry Amish Furniture sells furniture from numerous Amish builders – in their ‘brick and mortar’ store and online. Brandenberry is located in Shipshewana, Indiana. And this area represents one of the largest Amish communities in the United States.

So visit Shipshewana, and Brandenberry. And experience the Amish way of life for yourself.