Comments Off on Queen Anne: Beautiful ‘Antique’ Furniture For Today

When you hear the term, “antique furniture,” what’s the first thing that pops into your mind? Chances are it’s Queen Anne furniture because you think of furniture with a dainty look, curved feet, and arms. Plus ornate scrolls. So what’s the origin of this furniture style? What are its characteristics? Also, where can you find Queen Anne furniture today? To answer these questions, let’s explore Queen Anne: Beautiful ‘Antique’ Furniture For Today. 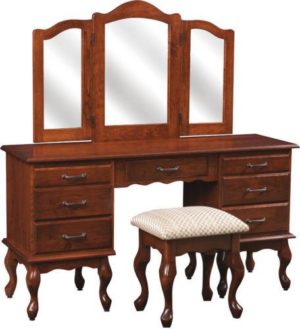 The Queen Anne style developed in the late 17th Century to early 18th Century England. More than a century after the style became popular, it began to be called Queen Anne. In fact, people also called the Queen Anne style Late Baroque and Early Georgian. Because the style represents a blend of several influences. Like Baroque, classical and Asian.

A collection of features gives Queen Anne its light, curvy, dainty and distinctive look. Prominent features are wood fashioned in C-scroll, S-scroll, and S-curves. Another feature is the modified S curve in the back of the chairs. And this curve matches the curvature of the spine. In fact, this feature, along with padded seats, help give Queen Anne furniture its reputation for comfort.

Other predominant features of the Queen Anne style are wing-back chairs and restrained – usually shell-shaped — ornamentation. However, the most recognizable (and most imitated) element of Queen Anne furniture is the cabriole leg. This shape is distinguished by a convex shape at the top and a concave shape at the bottom. Plus an ornate foot.

The best place to find top-quality Queen Anne furniture is Brandenberry Amish Furniture in Shipshewana, Indiana. Brandenberry’s Queen Anne-style offerings include vanities and dressers. Also secretary desks and jewelry armoires. Yet, Queen Anne furniture from Brandenberry is superior to furniture you’ll find in most franchise furniture stores and online stores. That’s because of skilled Amish cabinetmakers custom-craft each item of furniture. And the Amish builders use quality regional hardwoods. Like oak, maple, cherry, and hickory. So, with proper care, the furniture you buy should easily become a family heirloom.

Visit Brandenberry Online or in Person

You can explore Brandenberry’s collection of Queen Anne furniture online at Brandenberry Amish Furniture. Or, check out Brandenberry furniture in person by visiting their ‘brick and mortar’ store in Shipshewana, Indiana.